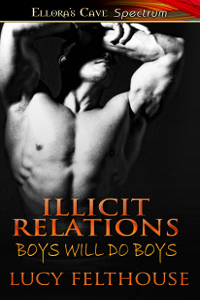 Terry’s had a crush on his second cousin Justin for what seems like forever. He’s hidden it as well as possible, knowing that the other man is out of bounds, forbidden fruit. Second cousins getting together isn’t actually illegal, but for Justin the relationship is too close—he just can’t contemplate them being together.

But when some new information comes to light about Terry’s birth and his place in the family, the whole game changes. Suddenly the relationship isn’t so impossible, and things soon begin to get hot and heavy.

What happens when the forbidden or taboo isn’t so taboo or forbidden…What if a secret that has been has spent a long time in the dark finally sees the light.

Lucy has done it again with another great story that both entertain and enjoyable to read. Even if the age thing was hard to wrap my mind around and I finally decide and how I overcame that obstacle was to imagine the two guys as being young then it was stated…

Surprises are plenty in this quick read.

I really like seeing the family support that was shown in this book..

Solid 4 star read, one I was given for an honest review from the author herself. Thank you