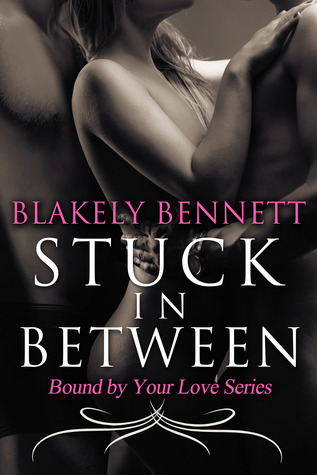 Jacqs is a twenty-eight year old woman caught up in an on again, off again relationship with Bond, who is her best friend and the one who causes her the most heartache. She succumbs, yet again, to his powerful charisma, but vows not make it into more than it is, a great night of sex.

Bond, too sexy for his own good, wants Jacqs for himself as he “dates” his way through the female population of South Florida. He selfishly doesn’t see the conflict of interest.

Red, Bond’s best friend, has watched Bond take Jacqs for granted for way too long and soon stakes his own claim on her.

Will Red and Jacqs budding relationship pull apart their tight-knit group of friends and will Jacqs survive being Stuck In Between.

Read with an open mind, love has no boundaries…remember that. This is a HOT read between the two male alpha characters to the female oh dear goodness…

Clueless one here lately with writing a great review but this was really surprisingly good and I am not really sure on where to begin.

Between friends with benefits, to the insecurities there is so much I can say… You will get wrapped up into the book, engrossing (yeah that’s the word)

Looking forward to finding what happens next in this series by the author. I received the book for an honest review and honestly I can say that this was a 4.5 star read..

One thought on “Stuck In Between (A Review)”