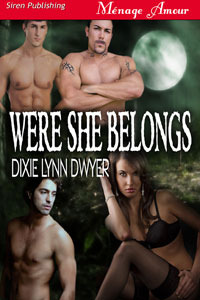 After being abducted, Lexi was unable to escape and about to be murdered. Growls. Bodies flying. The next thing she knows, she’s staring into the eyes of some sexy wolf she met at the club.

Her old friend, Sierra, helped save her, along with three very sexy and intimidating Alpha males. Although they are triplets, Lexi soon finds out that they are just as powerful individually as they are together. But she’s never really belonged, and all she can give them is danger and pain.

Paul, Saber and Andre have found their mate, and they’re ready to claim her body and soul. The one problem, Lexi trusts no one. She’s lived on the streets, survived on her own, and she’s not about to be pampered. They know she’s in danger and that she’s safest with them.

It’s going to take some sneaky, dominant sexual tactics to convince Lexi she’s where she belongs.

Note: There is no sexual relationship or touching for titillation between or among siblings.

A  Review by Beckey

The is a sibling ménage what can I call quad (is that right…???) that the brothers all feel a pull to claim the heroine… (There is no “play” between the siblings) .. This seemed like would be a good mix of heat, paranormal and such from the synopsis and it was to a point, but it seemed a little lacking but it was good and interesting…

Overall I can say this was 3.5 star read for me.

People seem to be more interested in my name than where I get my ideas for my stories from. So I might as well share the story behind my name with all my readers.

My momma was born and raised in New Orleans. At the age of twenty, she met and fell in love with an Irishman named Patrick Riley Dwyer. Needless to say, the family was a bit taken aback by this as they hoped she would marry a family friend. It was a modern day arranged marriage kind of thing and my momma downright refused.

Being that my momma’s families were descendents of the original English speaking southerners, they wanted the family blood line to stay pure. They were wealthy and my father’s family was poor.

Despite attempts by my grandpapa to make Patrick leave and destroy the love between them, my parents married. They recently celebrated their sixtieth wedding anniversary.

I am one of six children born to Patrick and Lynn Dwyer. I am a combination of both Irish and a true southern belle. With a name like Dixie Lynn Dwyer it’s no wonder why people are curious about my name.

Just as my parents had a love story of their own, I grew up intrigued by the lifestyles of others. My imagination as well as my need to stray from the straight and narrow made me into the woman I am today.